Take a Bite of History at Big Apple Inn

If you have lived in the Jackson, Mississippi area for any length of time, chances are you have probably heard the name Big Apple Inn come up in conversation. But have you been there?

The story of Big Apple Inn extends far beyond just a simple sandwich shop. Its roots extend far into Mississippi’s blues heritage, and deep into the legacy of our state’s Civil Rights history.

I arrived at the Farish Street location of Big Apple Inn to meet proprietor Geno Lee a little before lunchtime. Lee was on his way, so I unloaded my stuff at a table near the counter and took the place in. Lee himself describes the restaurant as a hole-in-the-wall. As soon as you walk through the door, you are greeted by two women working the counter behind a large piece of plexi-glass. One works the griddle while the other wraps sandwiches in white butcher paper. It’s obvious the place has been here awhile. The lighting is dim, the walls are covered in wood paneling. Towards the back are about five or six tables with red and yellow bucket seats. There’s a steady stream of people coming in and ordering “smokes,” or “ears,” or both.

In fact, after awhile I got the sense that the place was a little like Cheers, where everybody knows your name. The people who come here are regulars and greeted like old friends. Once Lee arrived, there were lots of calls of “Hey Geno!” coming from the customers as they placed their orders, to which Lee always smiled, waved, and replied, “Hey! How are you doing?”

What’s in a name?

The story of Big Apple Inn begins as a tale of a man chasing the American dream. Lee’s great grandfather, Juan “Big John” Mora was an immigrant from Mexico City. He arrived in Mississippi sometime in early 1930’s and got a job as a migrant worker with the railroad. Shortly after, he became injured and lost his job. In desperate need of money, Mora pulled out a recipe for homemade tamales from his mother back in Mexico City and began selling homemade tamales from a steel drum on the corner of Farish and Hamilton Street.

Back in its heyday, Farish Street was known as “Little Harlem.” It was to Jackson what Beale Street is to Memphis. It was where African Americans went to shop, dine, and enjoy entertainment during segregation. When Juan Mora started his tamale business, Farish Street was bustling and he was able to make a decent living. Eventually, Juan saved enough money to build himself a push cart to sell his tamales. A few years after that, he purchased a store front on Farish Street for $100. Mora decided to name his restaurant after a popular swing dance taking America by storm in the 1930’s: The Big Apple.

The Big Apple Inn moved to its current location in 1952 and has been family-owned for four generations. Geno Lee worked as a stockbroker until 1990 when he moved to Mississippi to help his father run the business. While it still sells tamales, today The Big Apple is known more for its sandwiches. The Smoked Sausage Sandwich – called a “Smoke” or a “Hot” – came first. It’s made from ground Red Rose smoked sausage cooked on a griddle, then served on a Krystal-type bun with slaw, mustard, and hot sauce. Patrons can choose mild, hot, or no sauce.

What put the Big Apple Inn on the map is the Pig’s Ear Sandwich. It’s exactly that: a pig’s ear, sandwiched between a bun. Mora acquired his first box of pig’s ears from a grocer who was trying to get rid of them. Lee says his great grandfather never turned away free food, so he agreed to take them, though he didn’t know exactly what he was going to do with them. Mora tried several different cooking methods, but nothing seemed to tenderize the tough pig’s ears. Finally, he discovered that boiling the ears for two days (yes, you read that right. TWO DAYS!) tenderized the meat enough to eat it.
Today, the ears are cooked in a pressure cooker for two hours. One box of pig’s ears will make approximately 300 sandwiches. Lee estimates he goes through 2-3 boxes of pig’s ears a day. The unique delicacy has attracted it’s fair share of attention from quite a few celebrities, including BB King, “Bizarre Foods” host Andrew Zimmern, and even President Obama.

The seemingly humble restaurant has a few other claims to fame than food that has endured almost 75 years. Legendary blues singer Sonny Boy Williamson lived in an apartment right over the restaurant and would frequently come downstairs to eat before going out to perform at night. Later, while he was field secretary for the NAACP, Medgar Evers had an office upstairs. Because the office was small, Evers held meetings downstairs in the Big Apple’s dining room. Civil right leader and activist Fannie Lou Hamer also had an office in the rooms upstairs. Today, Farish Street is lined with a lot empty and decaying store fronts. Faded signs and crumbling brick whisper tales of what used to be – and what could be if revitalization efforts continue to move forward.

In 2009, Lee opened a second location on State Street at Meadowbrook, on the North end of the Fondren neighborhood. He says the business there is steady. In fact, the State Street location is what allows the original Farish Street restaurant to stay open. Its third location in the MetroCenter Mall opened in 2017.

“I don’t stay here for the money,” says Lee, who is also an ordained minister. “I love the city and I love Jackson. I feel like this is my ministry.”

Lee goes on to add, “The Mayflower and Big Apple Inn are the oldest continuously operating restaurants in Jackson. It is amazing the notoriety this little hole-in-the wall has gotten.” 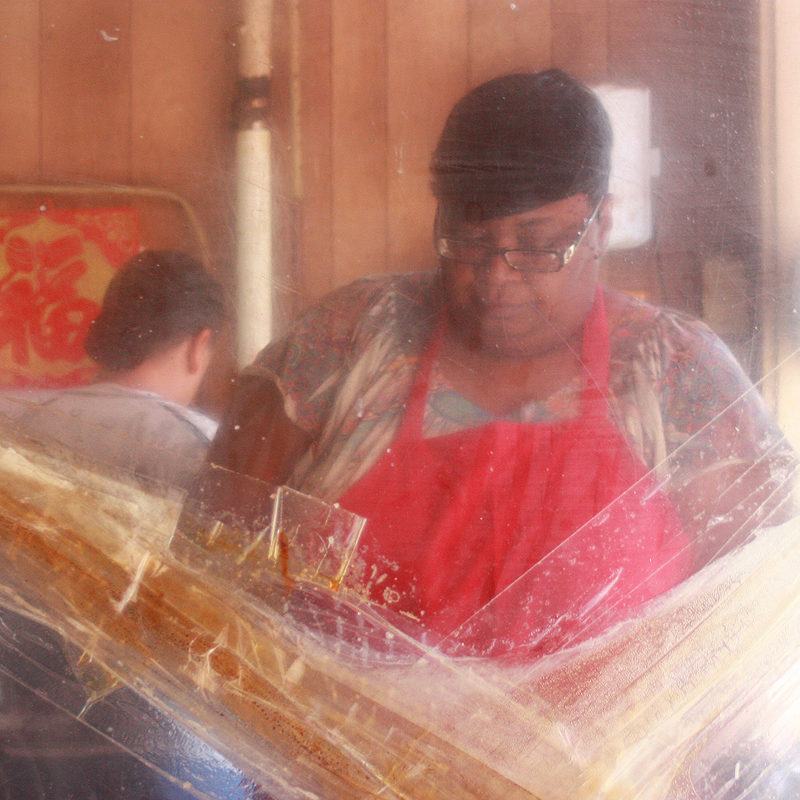 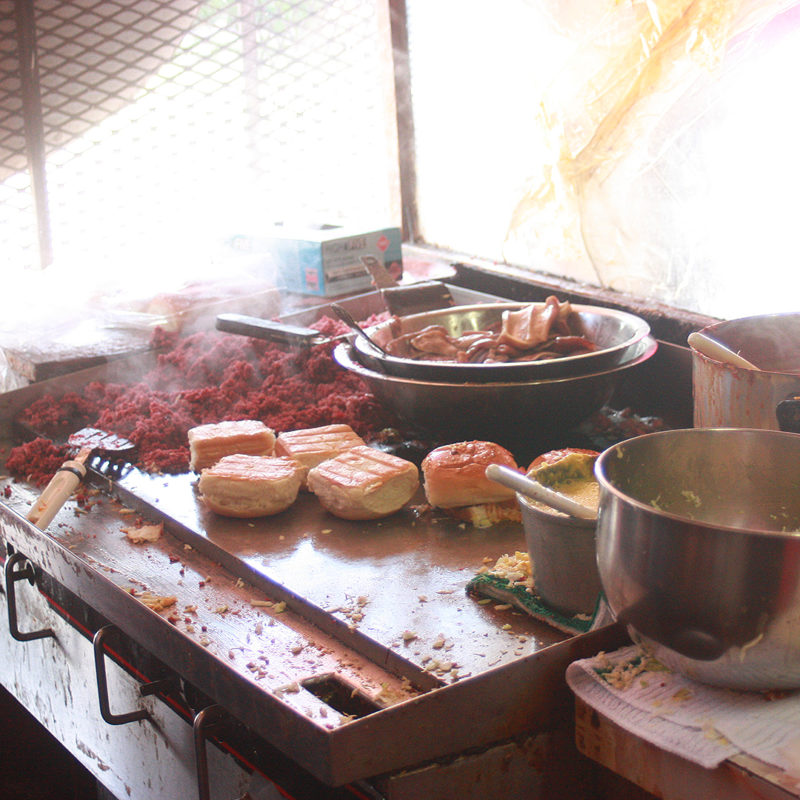 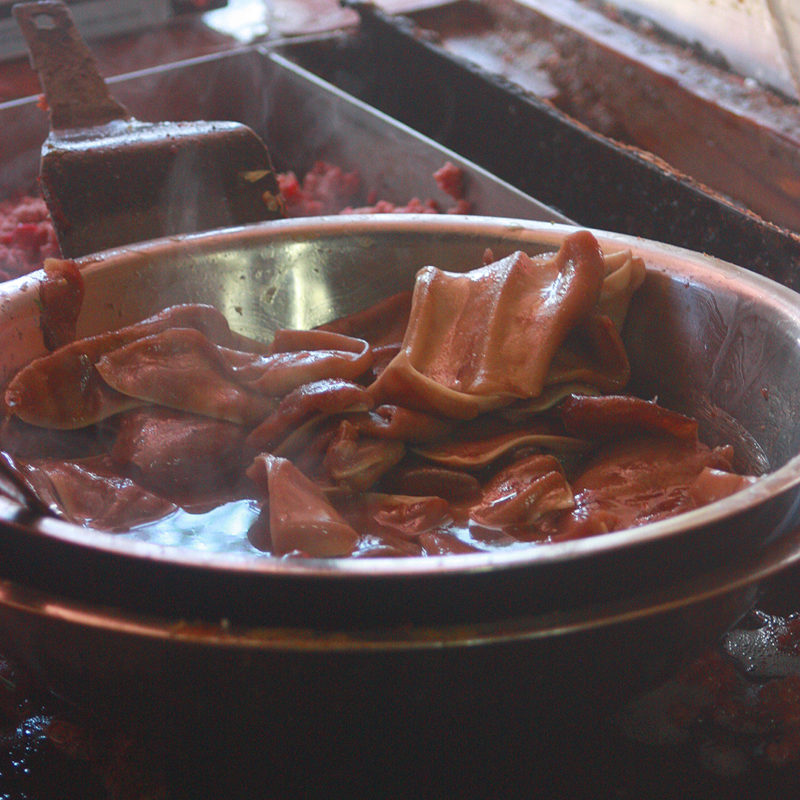 As I was packing up my stuff to leave, Lee passed me a smoke in a brown paper sack. Rather than take it home and eat it in the comfort of my own home, I decided to get a root beer out of the vending machine and enjoy it right there in the dining room. The sausage was smoky, the mustard sauce tangy, the slaw crunchy the bun warm and soft. I understand why the people who eat here regularly come back again and again. It’s for the stories – but yes, also those unique sandwiches.

The MISSISSIPPI LIST is a Mississippi adventurer’s guide to the best locally owned places to eat, stay and play in Mississippi, organized by region. Explore the site to discover new adventures then purchase your Mississippi Perks Pass to access insider offers at more than 100 locations.

Error, group does not exist! Check your syntax! (ID: 6)